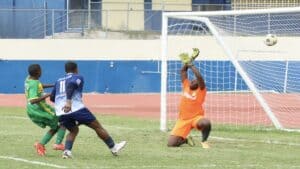 In Group A's action of the truncated ISSA/Digicel Manning Cup season on Wednesday, upsets were the rule of the day...