Veronica Campbell brown took to her Twitter to thank Comets Club International for honoring her with a lifetime achievement award.

Donald Quarrie was also recognized for his extra-ordinary sprinting career. The event was held at Antun’s Banquet Hall in Queens Village, New York. 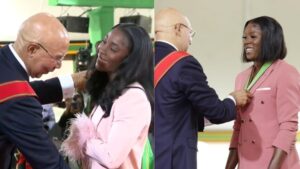