Blue Vinyl Won the Recent Battle of the Sexes at Caymans Park.

Blue vinyl won the recent battle of the sexes at Caymans Park. He outdid 1-5 favorite ATOMICA in the 10 -furlong St Leger to remain on course for triple crown honors. He challenged the filly from three furlongs out and had her covered after Dane Dawkins made his move.

The title-chasing jockey Dane Dawkins closed a scintillating four-timer at the Caymanas Park on Saturday and won in the six and a half furlong Information and technology Department Cup abroad with a score of 7-1.

Dawkins, who made his move home, had won four of the last events, beginning with FLIGHT TIME in the seventh before raping up the program with a hat-trick- D HEAD CORNERSTONE, PRINCE MARSHALL and JORDON REIGN’S.

However, Blue Vinyl came from the corner traveling stronger with Raddesh Roman. Vinyl caught the filly a furlong and half-out win by four and a quarter length in two hours, seven minutes, and three seconds. The championship was an excellent win for the team as  Blue proved he was too good. 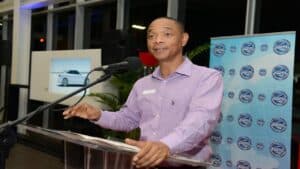